The published pages on this blogs are not static. Aside from publishing new post pages, existing posts of this blog are periodically updated with photos of new species, additional photos of existing species and additional information. All materials published here are the property of the author. Reproduction of any material published here in part or in total without the expressed permission of this author is strictly forbidden.

Monomorium pharaonis is a pest ant that is ubiquitous to tropical South Asia. This species is commonly found in human habitation and structures. It is rarely found in the wild.  The workers similarly to those of the pest ghost ant Tapinoma melanocephalum are often found floating on water surface in water containers where these ants get the water to keep the humidity in their nests which are usually in low moisture areas hidden in human habitation. Nests of Monomorium pharaonis are found among clothes, newspaper stacks, in and between books, inside electrical socket, under containers, in shoe boxes, etc.

There is very likely several strains (or sub species) within this genus with the most obvious morphological differences seen in the gyne or queen. Monomorium are monomorphic and polygynous. A colony typically have several sub nests that may span more than one building address. 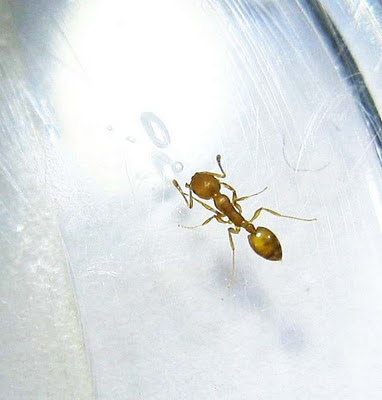 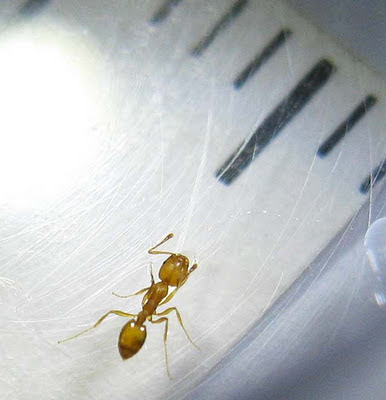 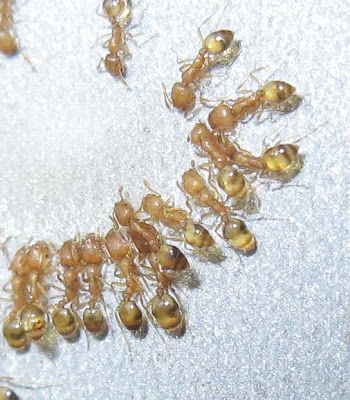 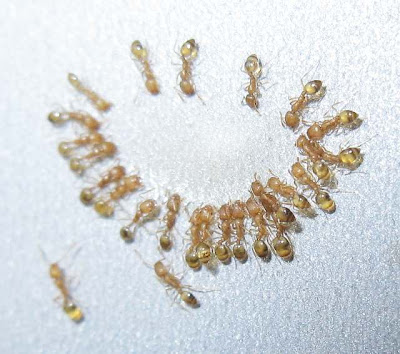 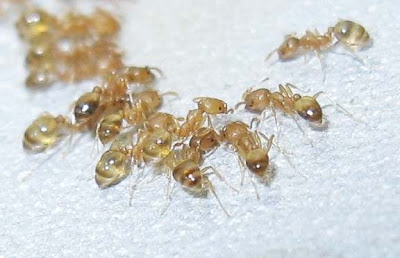 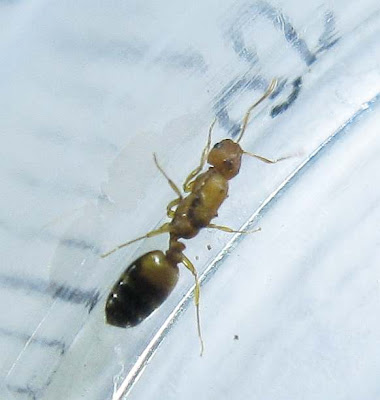 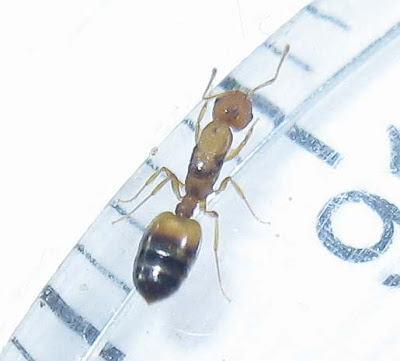 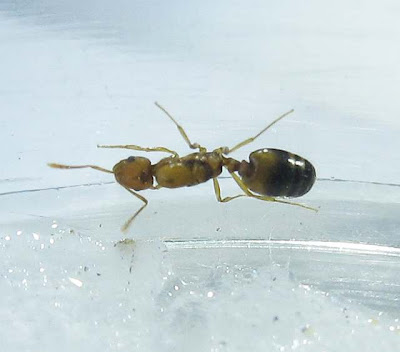 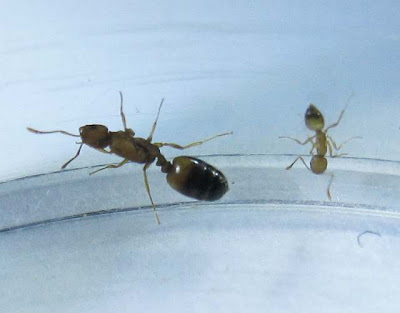 Queen and worker of Monomorium pharaonis. 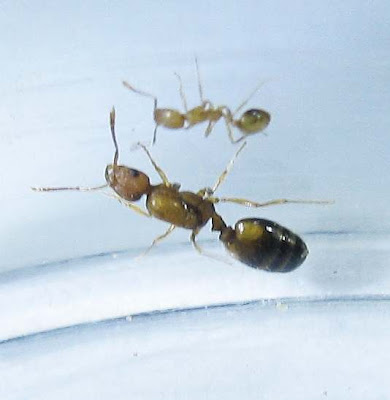 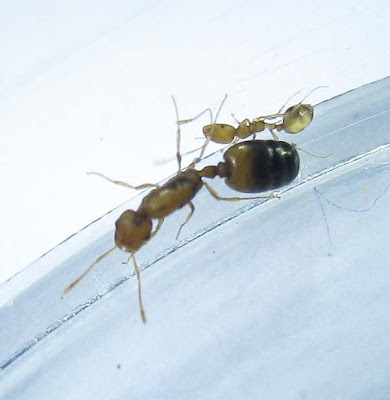 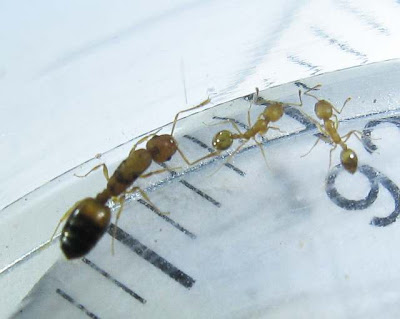 This species which at first look (with my naked eye) I thought was Monomorium pharaonis as it was the near the same size and characterized by the same behavior and inhabiting in buildings.

But closer examination reveals that it is either a variant or an entirely different species of Monomorium which I have have provisioning tagged as Monomorium pseudopharaonis. 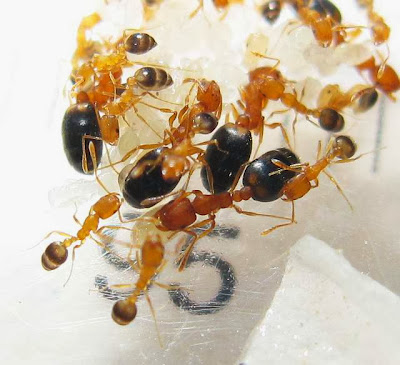 Monomorium pseudopharaonis secondary queens and workers. In these set of queens the thorax shows that these are secondary queens which never develop with wings and therefore incapable of participating in the nuptial swarming. Monomorium pharaonis reproduce new colonies both by swarming and by budding as is the case with most polygynous ants but this species does so entirely by budding as they do not produce (as far as I know) winged female alates. 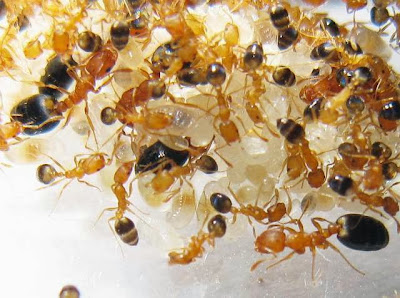 Monomorium pseudopharaonis are characterized by their secondary queens. The workers approximately the same size as Monomorium pharaonis is differentiated by the gaster with prominent dark portion that nearly covers four fifth of the gaster. Another distinguishing characteristic is the post petiole node which is noticeably larger than the petiole.

Secondary queens are common in termites and ants though not all genera have them, even in genus that are polymorphic. These secondary queens are what I called non imago queens which may resemble queens but do not develop wings as part of their growth. Another species from this location with secondary (my definition) queens is Pristomyrmex pungens.

Ants from this location such as Leptogenys, Aenictus, Dorylus all have queens that do not develop into the imago stage common in insects. Of course there are insects that never have a true imago expression in their life cycle whether they undergo complete (such as wasp, bees, beetles, ants) or incomplete metamorphosis (such as grasshopper, cockroach, termites). 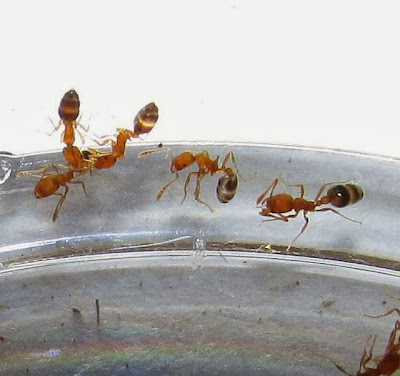 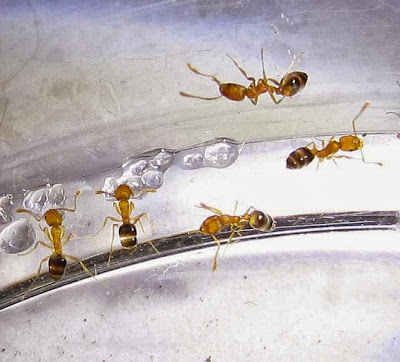 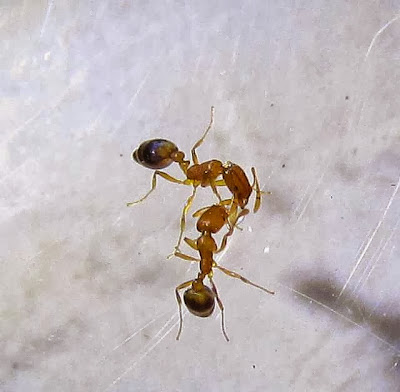 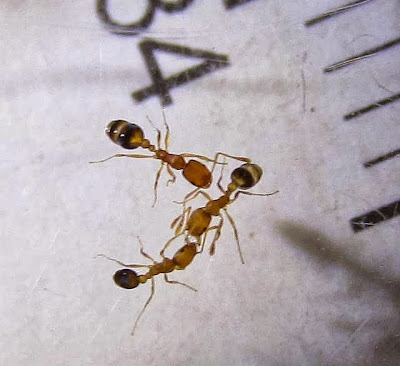 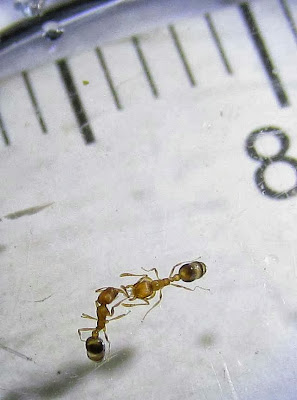 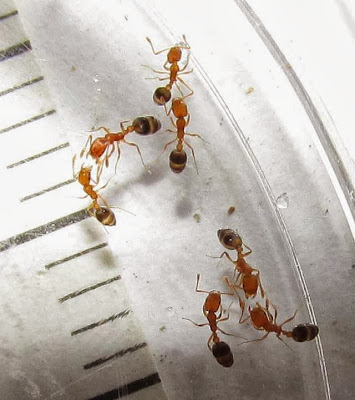 There is a problem with Blogger comments (and Google Chrome browser) which for whatever causes do not allow me to reply to comments posted. You can contact the author at gmail.com under the user id chquah. 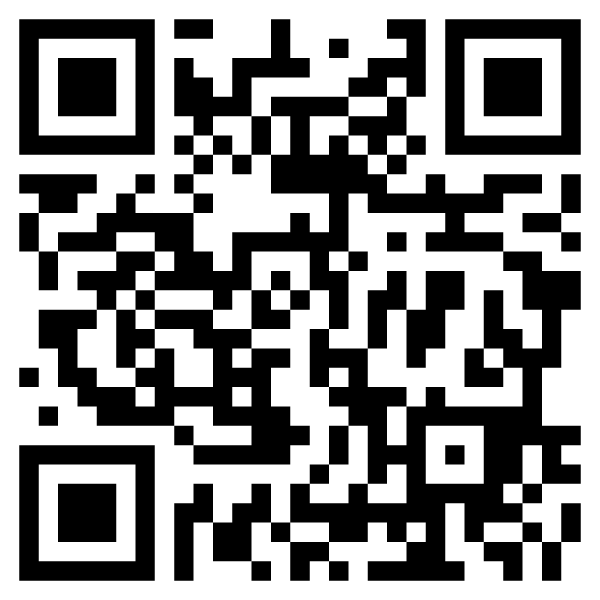 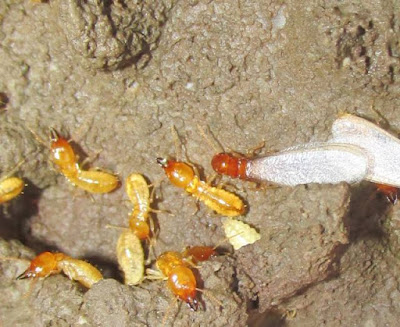 The author retains full copyright of all materials including all images published on this site.
Any reproduction of any material in part or in total is strictly prohibited unless with the explicit written consent of the author.
Non exclusive permission to use any material or part there off may be obtained by writing to the author.
Unless otherwise agreed upon the author continues to retain all rights to all material used by any party for which permission had been explicitly granted.